Sonim Technologies  XP3300 Force mobile phone has achieved the  Guinness World Record for Most Rugged Phone in the World.
The phone survived a drop of   25.29 meters (82 ft 11.67 in) onto concrete without any operational damage during a demonstration in Epe in 2011.

The record attempt, which took place in Epe, Netherlands was organised by M2M as representative of Sonim, the mobile Phone supplier,
to demonstrate the extreme durability of it’s latest ruggged mobile Phone.

The videoclip of the Guiness World Record event was also managed by M2M.
Todate, this clip has generated almost 300,000 visitors and the international press & social media cmpaign which followed the Record
went viral throughout the world, from America & Canada to Russia and South Africa. 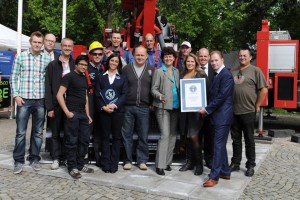 In 2010 Sonim participated in a unique way to Pepcom, international press event at Mobile World Congress in Barcelona. M2M challenged the tech press to the “Sonim Stress Test”.